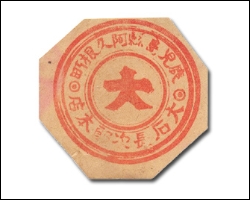 Seal paper to be used as a cork stopper for jars 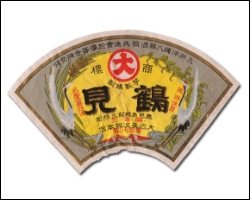 Label that was attached to jars

Label for Tsurumi jars in 1937. We can see the label was printed with "Received Gold Cup". The colored label indicates it was made for the celebration for winning the Kinpai Award (now called the Gold Award). The paper on the left was tied over the cork as a seal, and the label on the right was for the front of the jar.

On the left the cork seal paper, on the right the jar label: The beautiful golden-rimmed fan-shaped label depicts two cranes, an ear of rice, and a vine of potatoes. At that time, Siberian cranes migrated to Akune for the winter and lived near the Oishi shuzo. Akune was the land of cranes from Siberia. It is said that the first president, Chojiro, gave the shochu the brand name ‘Tsurumi' because he enjoyed drinking his own shochu while watching the cranes. Tsurumi means ‘looking at cranes’ in Japanese. The two cranes are vividly drawn on the label of this era. 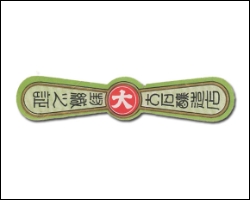 Seal paper for the mouth of the bottle 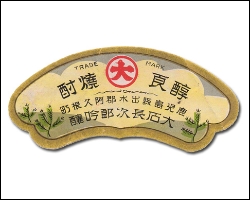 Shoulder label for the shoulder of the bottle

Label that was put on the body of the bottle

In addition to the fan-shaped label design, this oval label shows a potato growing under the crane's feet. The position of the crane is also slightly different from the fan-shaped label, reminiscent of the handwritten design at that time. The color scheme is wonderfully vivid, with a bright yellow background. This label has been reprinted and used on Reissue Label Tsurumi. Please enjoy.

Seal paper that appears to be from 1937 onwards 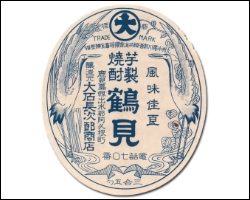 Label that appears to be from after 1945

This is a seal paper and label that seems to be from 1937 onwards. The design is printed in black and white just like the oval label, and the shoulder label is omitted.

This is probably because WW2 began in the late 1930s, and it was an era when luxury was not possible.

Seal paper that appears to be from 1937 onwards

This is the label from 1941 to 1945 during WW2. ‘Normal’ is written on the label. At that time special distributions rationing was in effect. Shochu with the words ‘special distribution’ was distributed to designated places when ordered by the government. It is from an era when the controlled wartime economy expanded and extended to daily necessities.

‘Ordinary’ on this label was designated to mean shochu for regular sale other than special distribution. 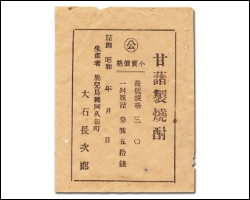 We can see that the price is written as 3.5 yen. When we looked up the old books based on the price written here, we found that it was a label around 1941. 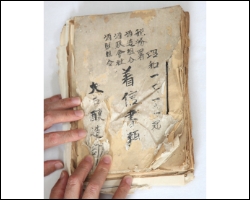 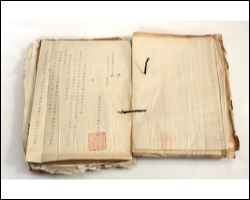 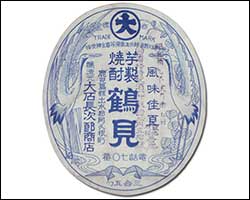 This label is from 1944. A seal is stamped on the label stating that this shochu is a special priced liquor. Special price liquor was established in 1943, and the tax rate was lowered to lower the price. It was distributed as a special item by the Minister of Finance, mainly for war production projects. The print says: February 15, 1944, the lowest standard 30 %, public price special alcohol, 1 bottle, 2.50 yen.

Until 1941 a bottle of Tsurumi cost 3.50 yen, as shown on the square label as above. However, according to the book from 1944 Tsurumi cost five yen. The book records rice increases: From May 1944 to December 1945 Tsurumi cost 5.40 yen. The cost rose to 8 yen in 1945. It seems that the price and liquor tax rose steadily, the price soared. According to the records of special distribution, as of February 15, 1945, it seems that shochu was set to sell at 2.50 yen as a special distribution product, instead of the list price of 3.50 to 5.00 yen. 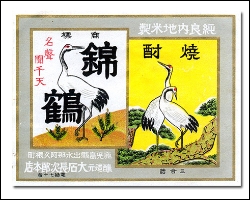 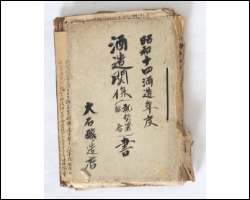 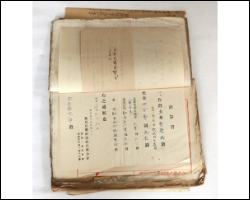 This is the label from the brand Nishikizuru. It says ‘rice shochu’. The label is also a fine color label, which is rare because at that time, rice was a luxury item.This is reflected in our luxurious color label design. Foreign rice became available at the end of the Taisho era (1912-1926) the distribution of Thai and Taiwanese rice expanded. This foreign rice became available even to rural breweries like ours. At this time, it became possible to make a lot of shochu at low cost by using such foreign crushed rice in small town distilleries.

At that time, rice had a better image than potatoes. We could make more alcohol with rice than potatoes if we used the same equipment. We're not sure why, but we think we tried to make rice shochu in our brewery. When the Sino-Japanese War intensified in the Showa era (1926-1989) the rice used as the raw material for old-fashioned shochu was also controlled and could not be used freely.(Old-fashioned shochu is made by a traditional method and is not mass-produced. It usually refers to the shochu that was made by small distilleries like Oishi distillery.)

This book records when we bought Thai and Taiwanese rice in 1939. From the facts in the remaining official documents issued by the prefectural brewery association, it can be assumed that there was strict control over the purchase of rice at that time.

In 1941 pressure from the government restricted and reduced the purchase of rice for shochu making to 57.2% in comparison to the previous year. Looking at the fact that the brand Nishikizuru has ceased after this, it seems that Oishi distillery had stopped producing rice shochu because it became difficult to obtain raw materials. 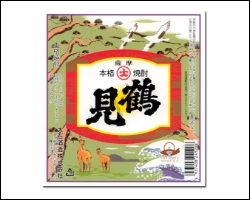 The design of this label is based on the island ‘Akune Oshima’ in Akune City. Akune Oshima is often depicted on the old label of Oishi Sake Brewery. Akune Oshima is a beautiful small island that has been selected as one of the 100 best beaches in Japan by Ministry of the Environment. It is accessible via a 10 minute ferry boat trip from downtown Akune.There are beaches, campgrounds, cottages and ancient pine forests on Oshima. There is also a herd of about 100 wild deer living there. The deer, pinetrees, cranes and waves are symbols of the island whi8ch are featured on the label along with the silhouette of Akune Oshima seen from the city of Akune. On the upper right of the label there's a crane flying to Akune.

Until midway through the Showa era glass bottles had not yet been distributed to Kagoshima prefecture. Therefore the shochu distilleries put the shochu in 18 liter jars and sent them to the liquor store.

It was difficult for people at the time to get tokkuri ( vessels people used to take shochu home) they used tokkuri rented from the distillery to transport shochu they bought at the liquor store. The liquor store proprietor filled the customers' tokkuri from bigger jars the distillery sent to the store. The shochu was sold by weight.

It seems that people bought just what they drank that day. The big one is about 1.8 L, and the small one is about 720 mL.

In the 20's and 30's of the Showa era (1945-1965), sales in a single bin bottle began. It is a transitional period in which there are still tokkuri. Around this time, many people used empty bottles (cider bottles, etc.) at home and bought shochu by weight.

After 1960, tokkuri disappeared rapidly with the fast economic growth. 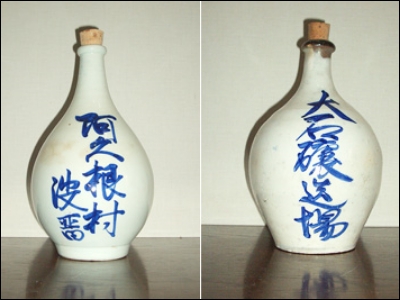 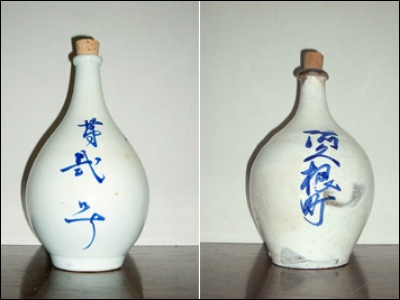 The one on the left is an elegant high quality vessel. The one on the right is of unknown age, but it was probably used as a general-purpose product by Naeshirogawa-yaki. These clay vessels with the white glaze and blue writing appeal to your modern sense of beauty and powerful shapes. 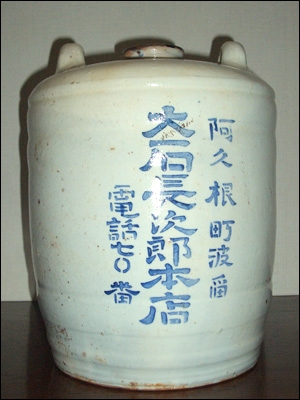 This Akune ‘Kame’ (jar) has a 5.4 liter capacity and is bigger than a tokkuri. This vessel was made after 1924 (Taisho 13) after Akune became a City 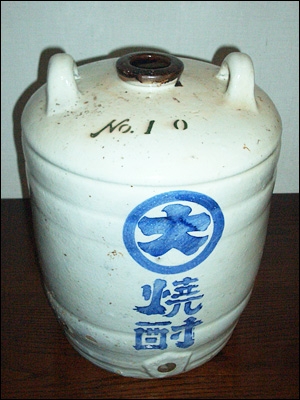 This was lent to customers for celebrations such as new house construction and ship launching ceremonies. It was returned after it was used. Therefore, the vessel is numbered. 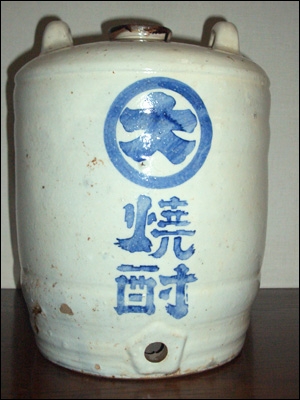 This was brought by a person who cleaned out an old house in the Heisei era (around 1990). That person remembered that his grandfather was always saying "I'll return this jar." There are people who are very disciplined.

From farmers to brewers; the potato preparation, jarring, labeling and shipping support the making of shochu at Oishi shuzo distillery. Women's handicrafts are also passed down from generation to generation.

This shochu brewery has been around since 1897. Since the founding of the brewery, the heavy stone walls and ceiling have been witnesses to generations of shochu making. We present the kabuto kettle distillers, moromi, tools, and other things that live in the storehouse that the fifth generation Toji reproduced by drawing blueprints.

Our distillery is located in Akune City in the northwestern part of Kagoshima Prefecture. The beautiful coastline facing the East China Sea stretches for 40 km. We hope you will experience radiant orange sunset, sea, mountains and the beautiful climate. From Akune Station the Orange Railway Line connects Higo (Kumamoto) and Satsuma (Kagoshima).